The Leaf’s brake ‘booster’ features it’s own integral control unit which interacts with other control units in the vehicle. It has the ability to command light braking requirements to be performed through regenerative braking using the traction motor only or by a combination of this and the hydraulic brakes.

Nissan has released many firmware updates for the electrically-driven intelligent brake control module in different models of the Nissan Leaf. Some of these updates relate to improved braking performance and others to safety.   As most of these updates were released some time ago, in theory imported vehicles should already have been updated in their country of origin.  Unfortunately, this is very inconsistent and is often not the case.  If a vehicle was serviced by a switched on dealer overseas then it may arrive with all updates applied.  However, there are also far too many examples where dealers overseas have not completed any updates.

In our local New Zealand market, an additional complication has arisen.  The majority of the Leafs in our country are imported used from Japan and Nissan New Zealand has a general policy of not making firmware updates for imports available even to their own franchised dealers.  Interestingly, because the 2011-2012MY Leaf was actually sold new in New Zealand (until 2015 as we recall), any Nissan dealers in NZ who are ‘Leaf-certified’ should be able to perform this firmware update as these have exactly the same braking system and firmware versions. That being said, we have been told that many Leaf-certified Nissan dealers are not aware of this and have claimed that they don’t have the ability to offer this update.  As a result, we have worked hard to support vehicle owners and importers with practical solutions to this problem which can be implemented on a vehicle anywhere in the world.

With ZE0 (2011-2012MY) models, the original brake system firmware version suffers badly from ‘grabby brakes’.  Later firmware updates on this model were specifically reported by Nissan to improve the overall brake sensitivity at low speed.  The latest update does seem to result in a significant improvement in brake feel and performance, however the condition of brake fluid should also not be ignored.  We consider a brake fluid check/change as probably the single most important service item on these cars.  It does not need to be done often at all, but if the brake fluid has become contaminated with moisture then this causes inconsistent braking behaviour and can cause more expensive problems. The graphic below shows the firmware versions to check if a car requires an update or not. This information is available on many diagnostics tools including the Pro version of LeafSpy. 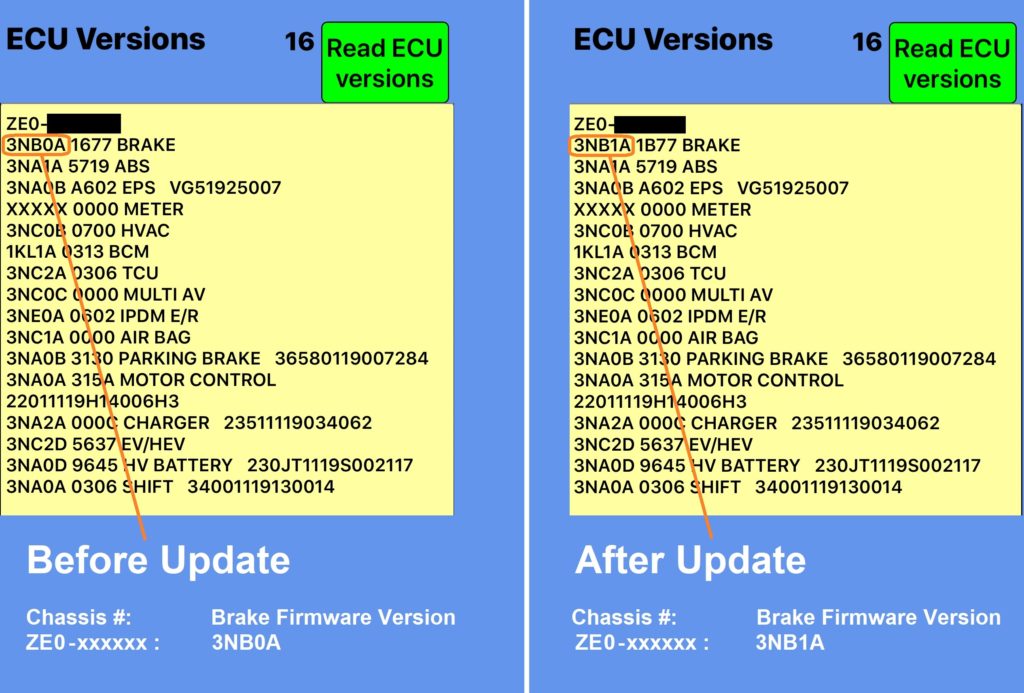 Are you a Christchurch local? Our Christchurch service centre is available now so click the below button to get booked in
Book Now!