We are pleased to introduce 16 Blade, a complete replacement platform for the Nissan LEAF. Built from the ground up by EVs Enhanced, 16 Blade has been designed using the optimal module layout with the confines of the original Nissan battery pack enclosure. 16 Blade uses a highly advanced active thermal management system and is compatible with a wide range of current cell chemistries. 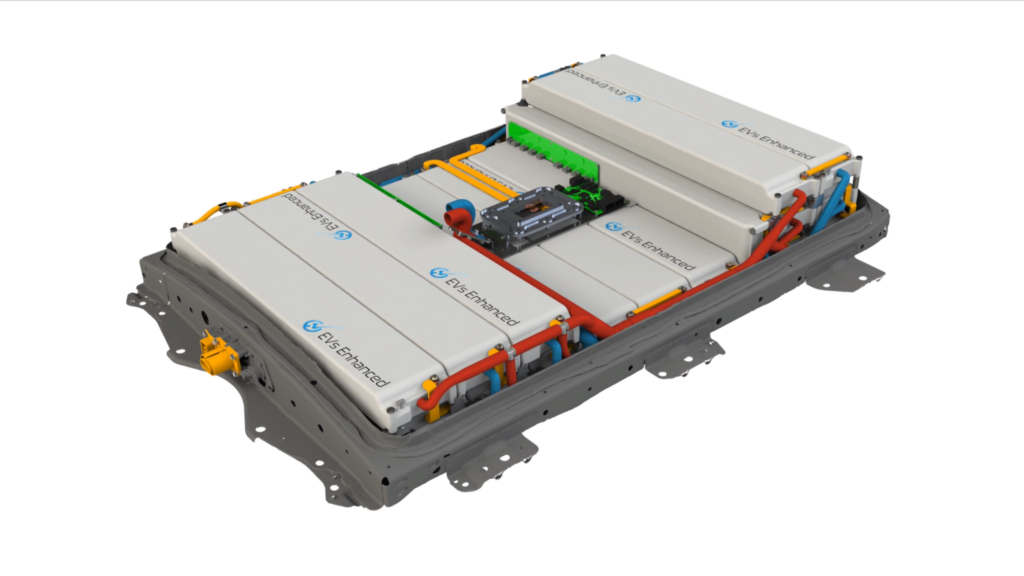 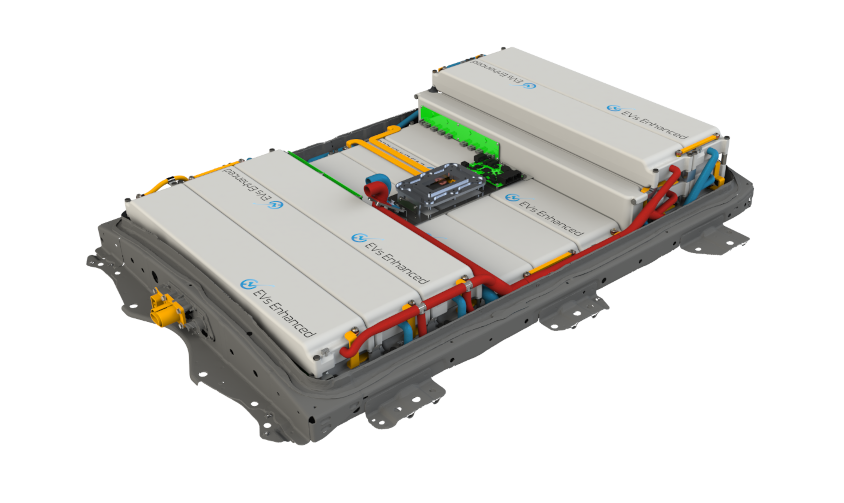 * specifications may be subject to change

When will 16 blade be available?

Production of the green (LFP) variant of 16 Blade was originally planned for late 2022 with production of other variants to follow this. Based on lead times for some production parts that we’ve only recently been able to test and validate at a prototype level, we will be unable to deliver production units before March 2023.

What models will 16 blade fit?

16 Blade will be made available for all 24kWh, 30kWh, and 40kWh Leaf models from 2011 through to the latest 40kWh 2022 models. We are currently not intending to offer battery upgrades for Leafs originally fitted with a 62kWh battery due to physical mounting differences. The first model to receive 16 Blade support will be the 2013 onward 24kWh and 30kWh Leafs shortly followed by the 40kWh Leaf.  Support for the original 2011-2012 model Leaf is planned to follow.

16 Blade is highly optimised and developed specially for the unique requirements of the Nissan Leaf so will not fit the e-NV200. In saying that, we have not forgotten all of the e-NV200 owners out there and we have an upgrade solution in the pipeline.

What does RED, BLUE, and GREEN mean?

16 Blade has three planned variants named RED, BLUE, and GREEN. These represent different cells with different chemistries and characteristics but within the same sixteen module form factor. Our initial focus is on the GREEN variant using long lifespan LFP chemistry and a capacity of approximately 40kWh. The BLUE variant focuses on maximum range with over 70kWh. The RED variant is for high performance applications and will be produced in  low quantities.

What range can I expect from 16 blade?

Do I need to modify my vehicle to use 16 blade?

16 Blade uses the original battery enclosure from Nissan allowing it to bolt straight it. There is some minor installation required in the motor bay to accommodate the thermal management system.

Are there any insurance issues around using 16 blade?

For installation in New Zealand, we are going to great lengths to ensure that 16 Blade is compliant with our local regulations. Early production units will need to go through low volume certification, but we are working to eliminate this additional cost going forward. We recommend that your vehicle is re-valued after the upgrade and ensure that you have a a higher agreed value with your insurance company. There are of other considerations for various international markets, but this information will be released through our local partners in that country as we begin supply and/or manufacturing in that market.

Is 16 blade covered by warranty?

Absolutely, 16 blade green is covered by a 160000km or 3 year standard manufacturer’s warranty with the option to extend this out to 8 years underwritten by an international insurer.

What is the charging capabilities of 16 blade?

Thanks to it’s highly effective active thermal management system, 16 blade can achieve consistent DC fast charge rates even when performing multiple fast charges in a single day such as on a long road trip.  The GREEN, BLUE and RED variants all have different maximum charge rates, but the GREEN variant will be limited to a fast charge current of 125A like the stock battery is.  However, because this peak current can be held up to 80% SoC, the charging time is reduced compared to a stock 40kWh Leaf battery which tapers quickly above 50% SoC.

How much will 16 blade cost?

Our target sale price for 16 Blade Green has been and continues to be approximately a third of the cost of a new 40kWh Leaf before any government incentives. That excludes the trade-in price that you will be offered for your original battery pack.
With global inflation is continuing to work against us all, our decision not to announce a fixed price earlier this year has turned out to be the right one. We’re sticking with that idea for a little longer until we start accepting orders.
However, nobody should be under any illusion that a finished 16 Blade Green pack will undercut the retail price of US$11,225 that Nissan USA charges for a new but inferior 40kWh battery. Our focus from the outset has been on making a superior product with a better design leading to improved performance and a longer life-cycle.
It is also important to remember that the above price guides are BEFORE the trade in of your original battery pack. The trade-in price offered will depend on the condition of your original pack, but taking this option will reduce your final cost of an upgrade. Because we re-use the original battery enclosure when creating a new 16 Blade pack, there will be no option to buy 16 Blade without trading in a pack in exchange. However, there will be options to keep your original modules/cells repackaged into a more convenient form factor for stationary storage applications.

Will 16 blade enable other functions like V2G (vehicle to grid)?

This functionality is already present in the CHAdeMO system found in the Leaf. Historically, this function as been seen to cause excessive wear on the original Nissan battery. However, 16 Blade Green with it’s long-lifespan LFP chemistry means that V2G applications will be a very practical option for Leafs fitted with this battery solution.

Why isn't it released yet?

Our small but dedicated team is focused on delivering a product that is designed and manufactured to a very high standard. While it is fair to say that we underestimated some of the difficulties associated with designing and repetitively producing a quality EV battery, we’ve also been operating in a really challenging environment over the past year. Supply shortages and logistical problems have significantly delayed the prototyping, validation and testing of many parts of our design and production process.
The good news is that we’ve completed a lot of important milestones recently and our path to production is looking much better. We’ve also used the additional time to refine some parts of our design that had room for improvement so we’re now looking forward to delivering an even better product.

Will 16 Blade be available in my country and can it be assembled locally?

The first deliveries of 16 Blade Green outside of New Zealand will likely be to our neighbours over in Australia. We’re planning for Australia to be our test case for supplying 16 Blade Green in kit-set form where the finished battery packs will be assembled there by a team that we’ve trained to build the product to the high standards that we expect.
Because we re-use the original battery enclosure when creating a new 16 Blade pack, it is most efficient to have the pack enclosure modifications and assembly completed relatively close to where the end customers are. The original battery modules can then be re-purposed but stay in the country they are already in. Otherwise you end up shipping a lot of donor battery enclosures back and forth around the world which is unnecessary and avoidable.
Companies that are serious about purchasing 16 Blade in kit-set form and doing finally assembly in their own country will be able to purchase a single complete battery pack from us without a trade in pack at an elevated price for evaluation purposes. This is to help them gain confidence in the product and thoroughly test it under their own local conditions before deciding to make a commitment to buying manufacturing equipment and completing training.
Once production is underway at full steam, we’re planning to focus our efforts on providing completed packs for our local New Zealand market and providing kits to help international partners produce the product for their local market. Therefore, the availability of 16 Blade in your country will depend on us reaching sufficient production volumes to meet demand as well as regulations in your country, but also on a company close to you.

With inflation and costs of living really starting to bite, that sounds out of my budget - are there any cheaper options to give my otherwise perfect early LEAF a significant boost in range?

Yes. There are several options:

1) We’ve already developed a complete range of plug-in battery translator kits to allow newer and larger capacity original LEAF battery packs to be put into cars needing an upgrade. We ship our translator kits internationally and these have helped to enable LEAF battery upgrades to be completed safely and easily anywhere in the world – assuming a good donor battery can be found. A good used 24, 30, 40 or 62kWh pack will almost always be cheaper than any new option. The problem has always been and continues to be demand far outstripping the supply. Nissan won’t sell new battery packs on their own, nor will they allow their dealers to upgrade older LEAFs with their newer packs (for example putting a 40kWh pack in a car that originally had a 24kWh battery). Whenever a 16 Blade pack is used to upgrade a relatively new LEAF with a battery in reasonable condition, this can have a cascading effect of allowing several lower cost battery upgrades to be performed. Thereby we expect our project to help more LEAF owners than just those that can afford to upgrade their battery pack to one of our 16 Blade options.

2) For those that really want all of the advantages of LFP cells, but in a more budget friendly option, we do have a Light Green version in the pipeline, but we need to stay focused on the original fully featured 16 Blade Green right now.

3) There are other competing aftermarket battery upgrades for the LEAF some of which appear to be worthy of consideration. Yes, some are very crude and poorly thought out, but some others seem to be well designed and certainly have their merits. While we haven’t seen anything for the LEAF as advanced as 16 Blade yet, we welcome the competition and believe there is plenty of demand to have several popular options all thriving.

Why have updates on progress been so infrequent throughout 2022?

Our team has been hard at work on more important things. Creating more interest in 16 Blade hasn’t been a high priority when we already have more than enough of this and we haven’t started to accept orders yet. Getting to production is the priority. However, as we’re nearing production, one of our new year’s resolutions for 2023 is to provide more regular small updates showing off the visible progress that is now occurring frequently.

Check Out Our Launch Video