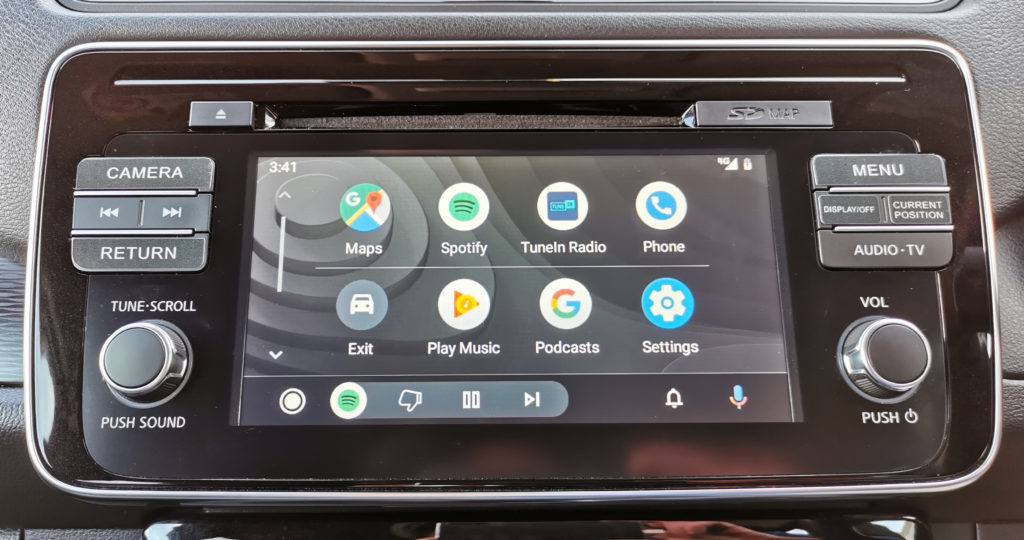 For the model year 2018 and 2019 ZE1 Nissan Leaf X and G models, Nissan introduced an updated version the ‘Connect’ audio navigation unit. As with previous version of the X and G Leaf these communicate with other control modules so replacement with an aftermarket audio unit is difficult to do without losing some functionality. While English language units out of ZE1s from other markets can be used, these prove to be difficult to obtain and overly expensive. The European version is the preference but these are also locked to the original vehicle which requires additional effort/cost before they can be retrofitted.

In an unusual move by Nissan, the UK and US variants of these vehicles included Android Auto built into the vehicle. However, this was left out of the Japanese variant of the vehicle. The Japanese variant being the most commonly found ZE1 in New Zealand.The Japanese variant did come with Apple CarPlay built in and provides an English interface for Calls, messaging and music. For early iPhone users, CarPlay unfortunately still utilised the vehicles GPS rather than the GPS built into the phone preventing the use Google or Apple Maps outside of Japan. This has been rectified in the latest iOS13 update allowing the GPS of the connect device to be used instead opening up the use of maps for later iPhone users

We now have the ability to upgrade these Japanese units to include Android Auto. By doing this, we are able to use up-to-date English maps provided by Google Maps via a connected smartphone. This works due to Android Auto using the GPS of the connected device rather than the GPS of the vehicle. In addition to maps, this also allows any other Android Auto compatible apps to be used directly on the built-in Connect head unit. With Spotify and Google Play Music being popular examples, there are hundreds of compatible apps available. This upgrade is available now through our EVs Enhanced Christchurch Service Centre as well as select EVs Enhanced partners around New Zealand.

In addition to having Apple Carplay and Android Auto, we now have the ability to convert the text of these units into English as well update the clock while retaining GPS-synced time. This allows for the most cost-effective way of converting these units from Japanese into English. This conversion allows the user to operate all other functions in English including, Charge and Climate Timers, AM/FM Radio, CD, Bluetooth, Music Box as well as browsing the menu and settings. The FM radio is updated with 87MHz to 108MHz, with pseudo-RDS available to display the current radio station name for most regions in New Zealand, there is little need even look at the frequency when flipping between stations.